Mon to Tue on appointment

The Imaginary Restaurant - Visual staging strategies in art and cuisine

bilderSTURM. Art and Revolt at the Goethe University Frankfurt in the 1960s

From costume image to costume event - the dramaturgical potential of costume as an active element of scenography.

Artistic Strategies of Mimicry in Works of Post-Internet Art 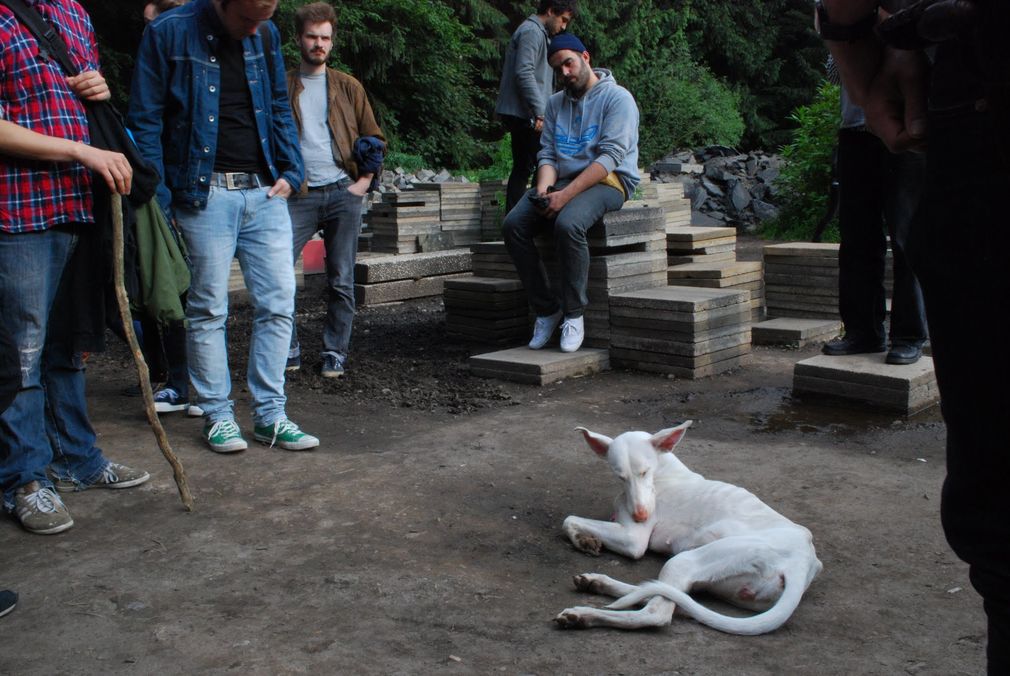 It is just not possible – not even at very well-staffed university institutions – to cover the entire scope of the wide field that is the history of art, comprising, as it does the methodologically well-organized description, classification and interpretation of the fine arts in the widest sense, along with architecture, arts & crafts and, in part, design from around the early Christian era right up to the present day. The matter becomes even more complicated if we include ‘other histories of art’, such as those of Asia, Africa etc. Accordingly, at the University of Art and Design Offenbach where there is just one professor (without regular mid-level faculty staff) addressing the subject, the focus tends to be on modern, and, in particular, contemporary art but without forgetting the related subjects of composition, design, the new or relatively new media, and the theatre. The objective of teaching here is always to ask systematic and in-depth questions about selected areas of history. Conversely, when we look at old art one of our aims is to derive from it perspectives on current-day art.

Instead of stuffing their heads with facts the students here are acquainted with history of art's ways of looking at things as well as with important categories, concepts, methods and terms used by the subject. However, what is essential is an interest in the diversity and fundamental distinctiveness of the relevant examples. The history of art is the subject in which the meaning of visual constellations and pictorial worlds from both the distant and recent past becomes apparent, offering an unbelievable treasure trove of inspiration and matters for debate, even for present day creative work. Looking at the history of art sometimes makes it clearer why, nowadays, certain paths are no longer pursued. An approach to the history of art that is not philistine but critical and enquiring thus helps us to see both the dictates of fashion and the trials and tribulations of the day more philosophically.

Since universities of art are concerned with education and in principle with innovations as well, with things never before seen, their relationship with the subject of the history of art is initially a fraught one, as the insights provided by the latter are often used in a flattering way in terms of the inspiration for something or seen as proving a certain lineage for some recently produced item of work or other – but, on the other hand, they can remind us of the achievements preceding such ostensibly peerless innovations.

The source of a second interesting relationship is to be found in what would appear to be a romantic notion of a contrast between artistic/creative work, on the one hand, and the field of learning or theory, which ostensibly always comes into existence after the event and is of a lesser significance, on the other. However, although people concede the charisma of original thought to subjects such as philosophy and art, (ostensibly a subject of a similar nature, although the former is, it is said, unfortunately only expressed in words), people’s mistrust of the subject of the history of art is more deeply rooted. Wrongly so! First, because it has primarily been exponents of the history of art who have helped artistic innovations to gain recognition (even though there have been and still are narrow-minded art historians). Second, it comes with the territory, so to speak, that the subject of the history of art in particular that knows all about and takes into consideration the historical background to the judgments and conjectures it makes allows it to contrast favorably with the harassed quality of the opinions advanced by some curators and art critics. Third, work on the history of art can, of course, for its part, be original and sometimes even creative –indeed, to such an extent that what was once purely specialist terms or concepts relating to the history of art have long since become part of a superordinate form of thought and debate (and these have even infiltrated the legitimation vocabulary of the artists who nevertheless regard the subject of the history of art with suspicion!). Fourth, the artists themselves have certainly become eager recipients of the history of art and have processed it (even further): not only by quoting something in a learned, reverential, changed or postmodern, parodying manner but also in cases where conceptual or collector-like artistic practices draw on accumulated art history almost as a matter of course, or where artists in turn use their art to determinedly and critically investigate interpretations (for example of modern art in something known as 'modernologies'). Needless to say, there are repeated instances of artists who also engage in activities concerned with the history or theory of art themselves and do not see this as being in any conflict with their artistic work.

A third interesting relationship, but less for a university of art than for a thoroughbred art academy, and relating more to the colourful institution that is open to all forms of design, all media and all applications, and this is how the HfG sees itself, arises is the term ‘art’ in the term ‘art history’ is seen neither as a trifle nor as a fuddy concession to an old and honourable discipline. Instead, art history (irrespective of the fact that it has contributed more than other fields to studying the results of precisely not exclusively artistic endeavour) must constantly re-determine what its innermost subject matter is, namely ‘art’. They may be completely out of fashion today, maybe completely discredited, but questions as to the rank and validity of a work are key to art history. Alongside the one or other question they denote the difference to image science, which has a different thrust, and the promiscuous visual interest of cultural studies, which have grown accustomed to ignoring the lines drawn between art and non-art.

For students in their first or third semesters, it being the winter semester, they can take as an option Art History (WP). The course presents the key fields, positions, concepts, and notions in post-War art: also from the angle of lesser known precursors in earlier art and subsequent trends in later art. Students can gain a credit (ungraded) by attending the course regularly and taking part.

2nd semester students are regularly offered the obligatory summer-semester Art History (P) course. The focus there is on imparting the discipline’s key methods, categories, and concepts by means of examples drawn from history and a broad range of media, showing among other things that not only art, but also the consideration of art has a specific history. Students practise describing, comparing and factual arguments for the interpretation of art. A graded credit is awarded for regular attendance, participation, and successful completion of an exam.

Lectures/seminars (mainly during the foundation course) specifically address a particular topic, medium or genre; they can relate to a particular ‘venue’ for showing art, such as public space or the museum, but also to an era or an art movement, or they may focus on a systematic, possibly art theoretical question. Less often they may also concentrate monographically on a single artist. Occasionally, lectures and seminars may also look at architecture, theatre, film, design, advertising or everyday culture. In this case, this will tend to be under the aspect of their visual elaboration or in some respect relating these to corresponding works of art.

The topics and handling thereof are comparatively demanding, so that it would be difficult for a non-art historian or would entail a considerable amount of effort, to make these topics accessible in private study. Here, students can become acquainted with many facets of special topics and, if they become appropriately acquainted with these topics, they can get to know them at the cutting edge of research.

Acquisition of the ungraded credit requires regular attendance as a minimum (possible further, smaller efforts that may be required would be announced at the beginning of lectures); the graded credit further requires producing a written assignment.

As art historical topics are constantly being changed for the Basic Courses and correspondingly do not recur over the years, students of all (!) semesters should seize the opportunity and attend when interested in a topic.

Visits to museums and exhibitions in the region, as well as smaller and more extensive excursions (mostly together with other colleagues) are part of the teaching in the Basic and, even more so, in Advanced Courses – obtaining a certificate however is only possible in exceptional cases, for example when the excursion is meaningfully related to the topic addressed in a regular lecture series or course.

The event »art criticism on demand. Discussing students’ works«, taking place on the basis of a rotation schedule, is also worthy of note. This takes place after previous arrangement, in a smaller circle and in conversation between the student and teacher. The concern here is discussing an artistic or design project or work that is currently being developed – also in view of scientific-theoretical topics related to the project that may be of interest for the individual student.

The graduand colloquium is attended by all those who are completing the scientific and theoretical part of their diploma thesis in the subject of art history or who are sure to do so. As an alternative and/or in addition to this colloquium, individual discussions with diploma students are offered.

Lectures to supplement the teaching of collegues

Further projects in the context of teaching

(founded with H. Zitko)
​Discussion forum with collegues for students 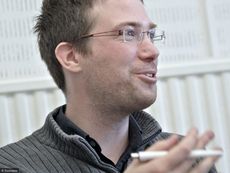 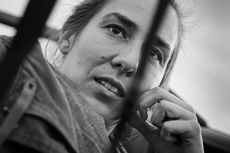 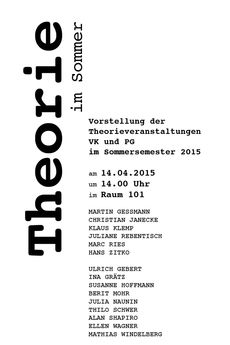 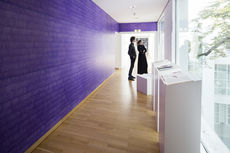