As a field of teaching, Electronic Media not only involves the aesthetic but also the technical analysis of artistic and applied issues and project developments in relation to electronic media. This field of teaching covers both the development of specific media applications and basic media research.

The focus is on the artistic handling of films, videos, computers and installations in their diverse forms: video installations and video sculpture, sound machines and audio art, computer art, computer graphics, digital image simulation and animation. The aim is for students to develop their own artistic position, to critically analyze the topic of media and mass culture and find an artistic response to it.

At HfG Offenbach we explore and seek to advance the aesthetic innovative energy of new media, their potential for future forms of graphics, painting, sculpture and installation, stage design, film and movement simulation as well as for design and the public. This is done in a conscious dialog with traditional artistic media and not in an overly technical, self-referential manner. This linking with traditional media is realized among other things in video and spatial installations, animations or sculptures. Workshops, technical courses, guest contributions and collaborations serve to complement the instruction in Electronic Media.

the AI Lab forms part of the Electronic Media teaching area. It supports students in developing Deep Learning algorithms adapted to their aesthetic ideas and/or in integrating already existing data sets and trained models into their artistic practice. more 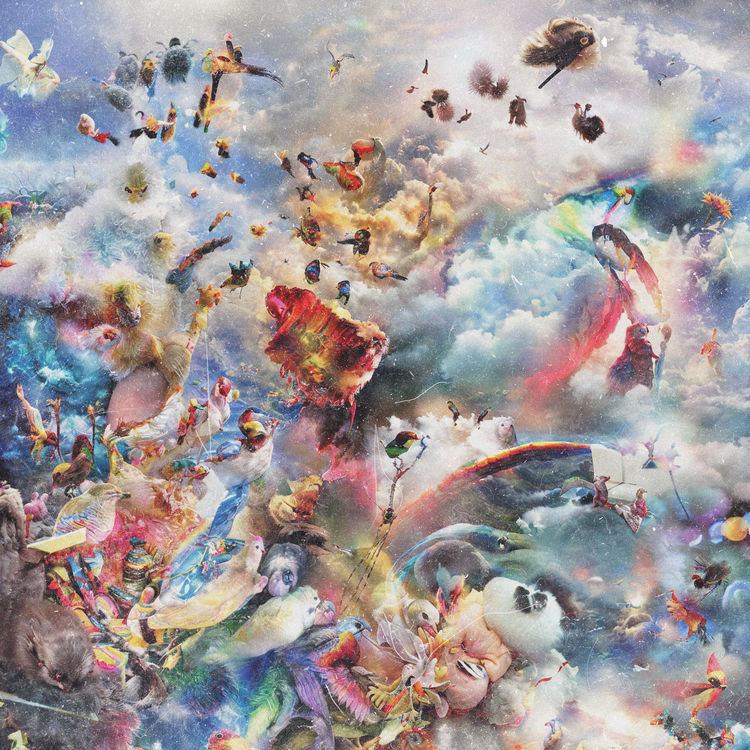 Studying at HfG Offenbach provides an opportunity for an exchange of ideas and opinions between lots of different creative and theoretical disciplines in the fields of visual communication and product design.

The aim behind relaunching the website was to develop a concept with a visual thrust that does not overly emphasize any one particular area of study nor rely on a non-moving structure.

Teachers and students alike shape the face of HfG through their work, while the university provides a setting in which they can develop themselves freely.

With this in mind a design was evolved whereby the content has a decisive influence on the website’s appearance. There were no rigid layout criteria set to which content then had to be adapted. Individual objects are arranged continually in a pattern. The width of the browser determines how pages are made up and how white spaces are formed. This means an individual image is automatically created for every page and every screen width.

The line is the expressive element that all HfG disciplines have in common. As a design tool it is key to the website’s design concept. In its role as a designator, it structures the content and helps users navigate the site. Chance errors and irregularities lend it an individual character.

The line is transformed from a purely functional object into an independent form, which shapes the look of the HfG website. 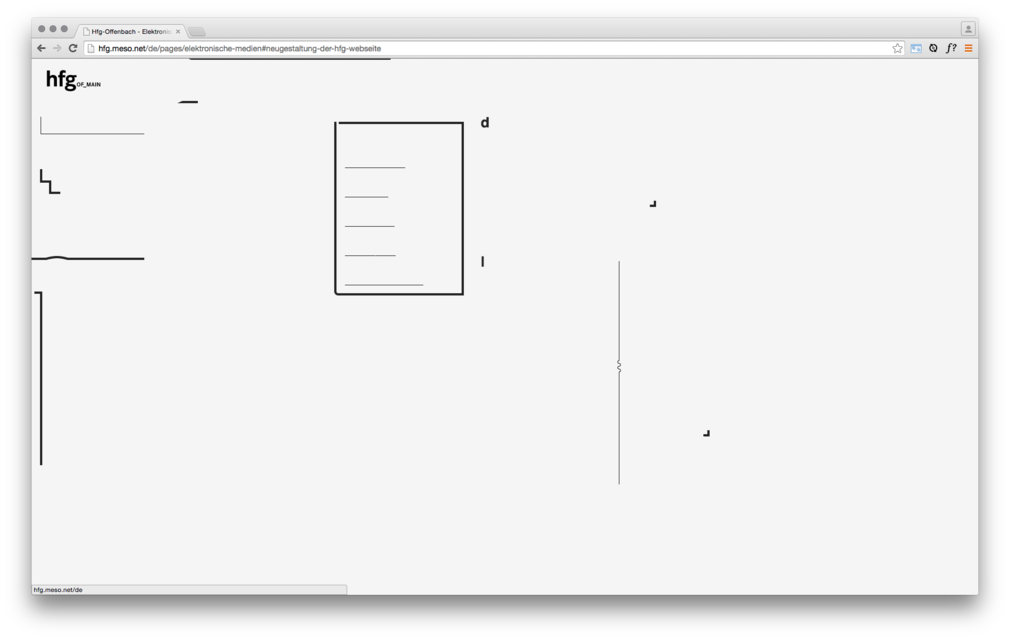 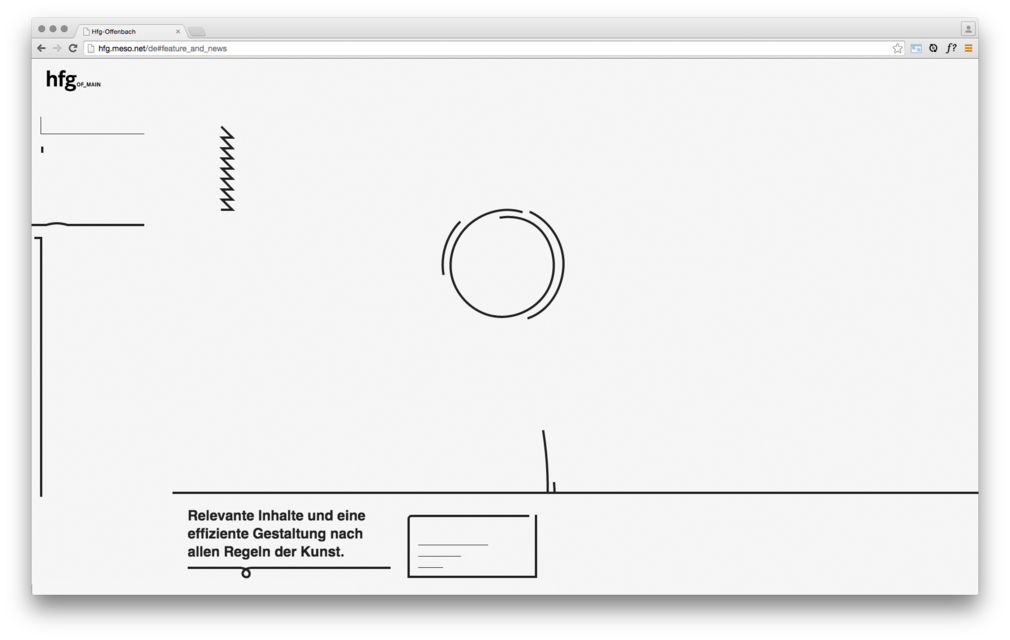 When you examine it closely the perpetual archetypal struggle between frogs and flying goes round in circles. In a nutshell: life and its attendant problems can be a great burden. This being so, living in the here and now would seem to offer relief, but even the frog doesn’t know if this is really the case.

For a while now, thanks to the introduction of “Oculus Rift” VR headsets, wearers have been able to walk around virtual spaces. Using head tracking and stereoscopic vision, the illusion is created that the observer is in a completely different location. We used this technology (known since the 1990s) to design a virtual >ghost train<. For this group project, classic elements of a fairground and audio-visual experiments were combined. Given the observer’s expanded possibilities when moving in a 360-degree field of vision the search for new, narrative forms and the immersive experience of space represent an interesting and contemporary field of research for us. The presentation takes place in a black cabin with a seat. One after another, visitors are asked to sit down and don the glasses. The entire show lasts a total of about seven minutes.

For more than 80 years the ghost train has been a classic attraction at fairs. But what goes to make it so appealing? Is it in travelling through dark spaces filled with more or less strange and frightening mechanical figures? Ideally, the train allows us to negotiate spaces of the imagination replete with those stories that not simply frightened but also fascinated us as children. Since then we have repeatedly encountered this fascination in media representations, which for their part compete as attractions for our attention.

The same goes for the stereoscope, in other words the reproduction of images that appear three-dimensional, which also repeatedly crops up in history as an attraction, for example, in photography since its origins in the 19th century. In the moving image it has since the 1950s enjoyed varying levels of popularity in the form of 3D cinema.

Its most recent wave of success continues until today, and extends beyond the confines of the movie theatre: The principle of spatial vision plays an increasingly important role in »virtual reality« (VR), a phenomenon that was already theorized about in the 1980s, and which took its first tentative steps into the real world in the 1990s. VR refers to spaces that can be experienced in interactive and immersive ways, an artificial reflection of our world.

Arguably the »Oculus Rift« headset can be described as one of the pioneering developments, which help account for VR becoming an attraction again. Indeed, since the start of 2013 it has made the

rounds again as a developer version. Apart from stereoscopic vision it also lets the observer move in a virtual environment: he experiences actions in a 360-degree radius simply by turning his head.

The »Ghost Train« piece exploits modern technology in the guise of audio-visual experimentation to link it with the fascination of fair attractions. Initially, we experience the work as a mysterious presence in space, a black monolith-like box, whose content is not directly revealed. It represents a space of the imagination filled with expectations. Once visitors are admitted and left alone shortly afterwards in the cramped interior, the walls open up to permit them a journey into virtual reality.

In five sections the five participating artists have realized an interpretation of their own personal horror. In unique visual language and approaches the students explored their fascination with the frightening. Sometimes the interpretation verges on the absurd, as with Stephanie Kayß’ roller coaster ride through a gaudily coloured nightmarish world of being born, or involves visiting a strange cult with mysterious intentions as in Merlin Flügels’ case or we experience Elena Osmann’s monumental cathedral-like descent into the depths of awareness of one’s own transience. Alternately, we are confronted with a disturbing realism: Marc Rühl’s Haus am See (House at the Lake), into which we penetrate as unwelcome guests or Dominik Keggenhoff’s abandoned allotment in which, what we do not see is decisive.

As such, the »Ghost Train« represents an interface between our actual physical presence in room installation, being thrown into virtual worlds, which are the product of their developer’s imagination and simultaneously spaces of the imagination, into which everyone can place his own expectations, ideas and fears. 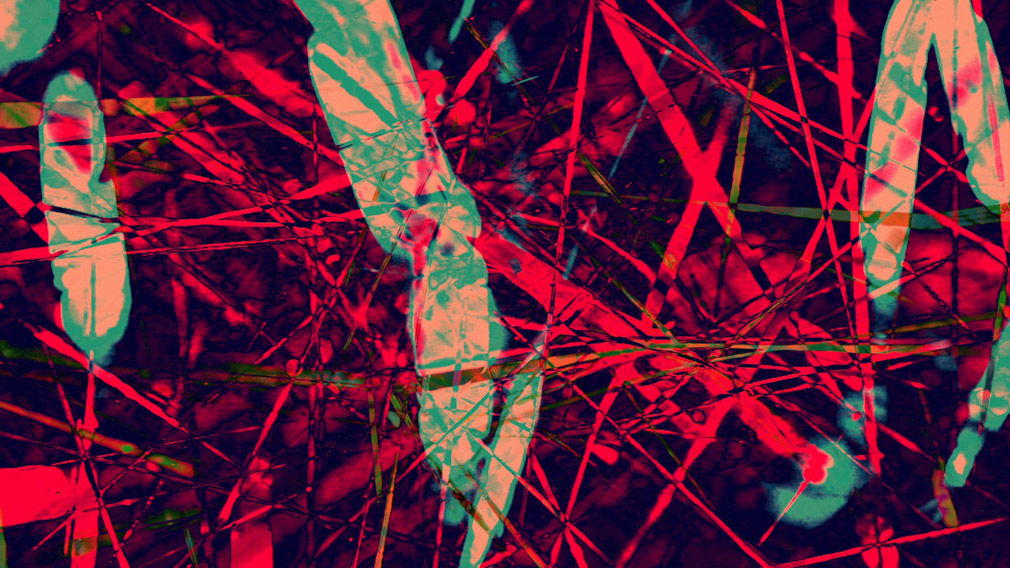 Intro to CMN (3:45 min.), Animation/series and sound by Bill Raab

For the CrossMediaNight 2014, Bill Raab developed an introductory film that was shown as a key visual theme and introduction to the role of CMN. Other short teaser animations were incorporated between the blocks of film.

»(..) when thinking about how to realize the introductions to the Cross Media Night 2014 I had the idea of presenting it in an analogue manner. My aim was to produce the effects myself familiar to us from programs such as After Effects, (Particles, 3D, FraktalNoise, etc.). After a series of different experiments with materials, light and movement I discovered an interesting realm located between the analogue and digital. From this I produced another work: AvfxEX that I accompanied by including edited real sounds and samples.«

Supervised by Prof. Alex Oppermann and Sascha Wild as part of the »audio&vision« workshop

The video installation »Eskalation Eisskulptur Epsilon (ε)« is an allegory for excessiveness. The video shows the protagonist – filmed from above – bathing in 150 liters of ice-cream. The projection is positioned analogue to the camera perspective between two platforms so that the bath tub seems to sink into the ground. This allows the observer to experience the actual space.

Reinforced by the symbolically charged subject and the perspective of the projection, the bather is robbed of her power. Although the action leaves behind prints in the ice-cream the process of escalation is played down through the looks of the observers and the private act of bathing is interrupted. The voyeuristic curiosity of the observers demonstrates the individual’s loss of power.

The autonomous individual becomes a voyeur who feels compelled to satisfy his visual desire and is uncontrollably ruled by the world of objects without being aware of the consequences. 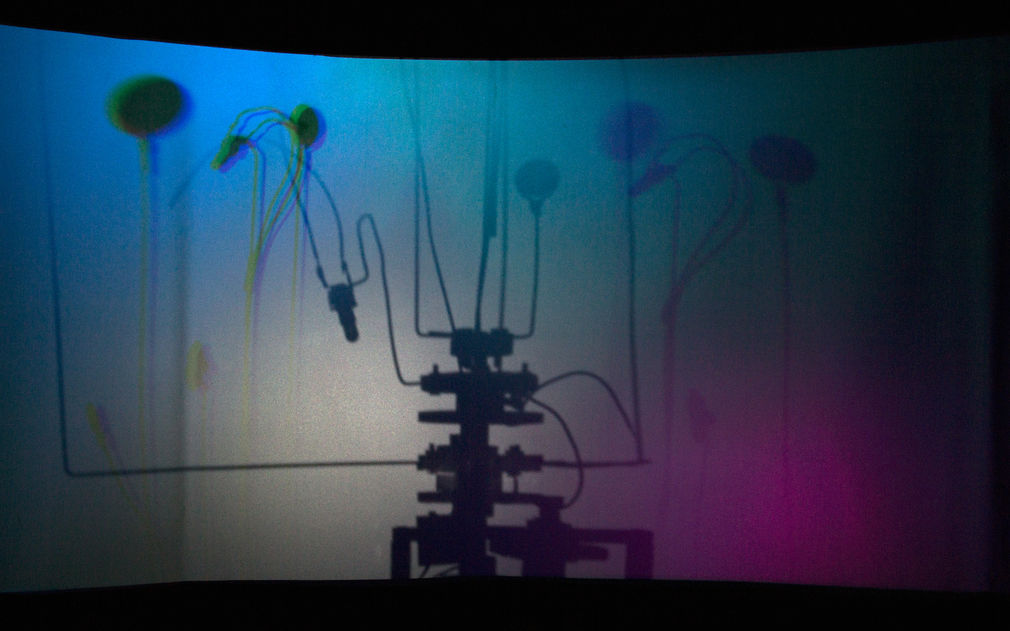 The kinetic installation »Lichtmaschine« was developed for Luminale 2014. The machine consists of a complex assembly of screens, kinetic objects, LEDs and video cameras. Around the screens arranged in a circle many small, movable and immovable objects are positioned, which are driven by motors and lit by LEDs, casting silhouettes and light patterns onto the surrounding screens. Cameras installed inside the circle of screens record the images of objects thus generated, which are in turn projected onto the large screens positioned in the room.

»Lichtmaschine« experiments with direct atmospheric (spatial) experiences, methods of image production and the interplay between real and digital images addressing the topic of vision and perception but also those process of observation and identification. 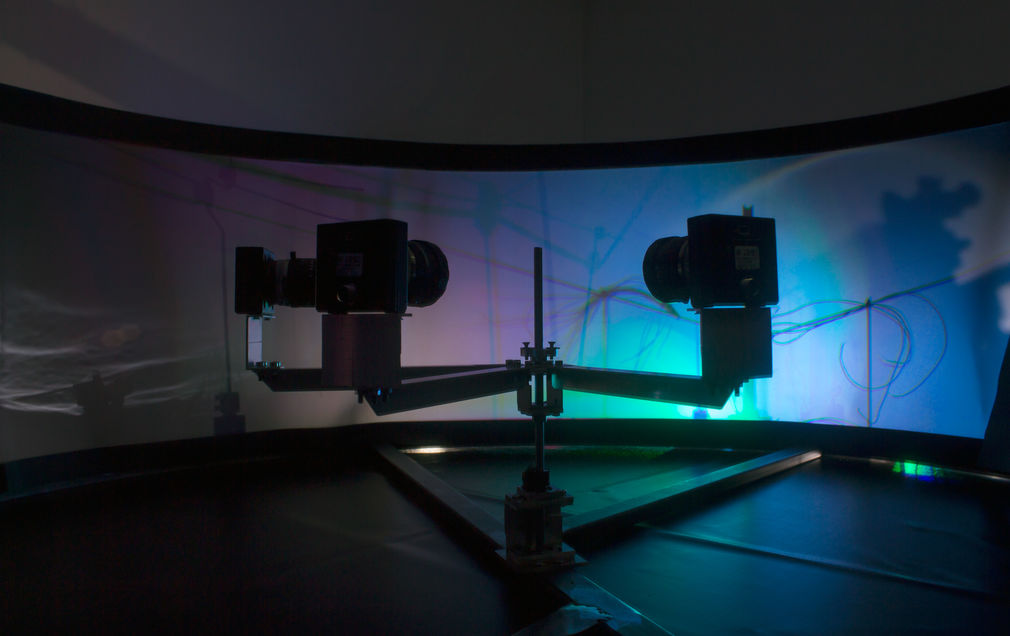 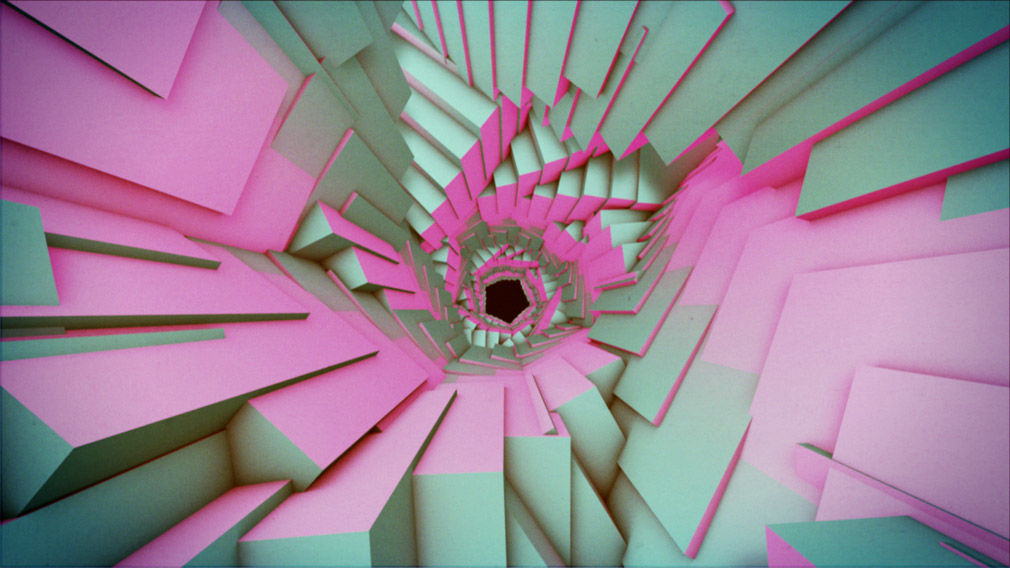 The experimental music video for Sergej Auto’s »Ni« plays in a simple graphic world. It explores the associative relationships between space, form and music. The observer is unable to resist the hypnotic effect of the complex architectural figures and is increasingly captivated by them.

Curator Manuel Rossner came up with the idea of creating a virtual art-gallery in 2011. Today »cerma« has three exhibitions. Instead of the hallways it has pixel spaces which allow visitors observe art-objects in 3D format. 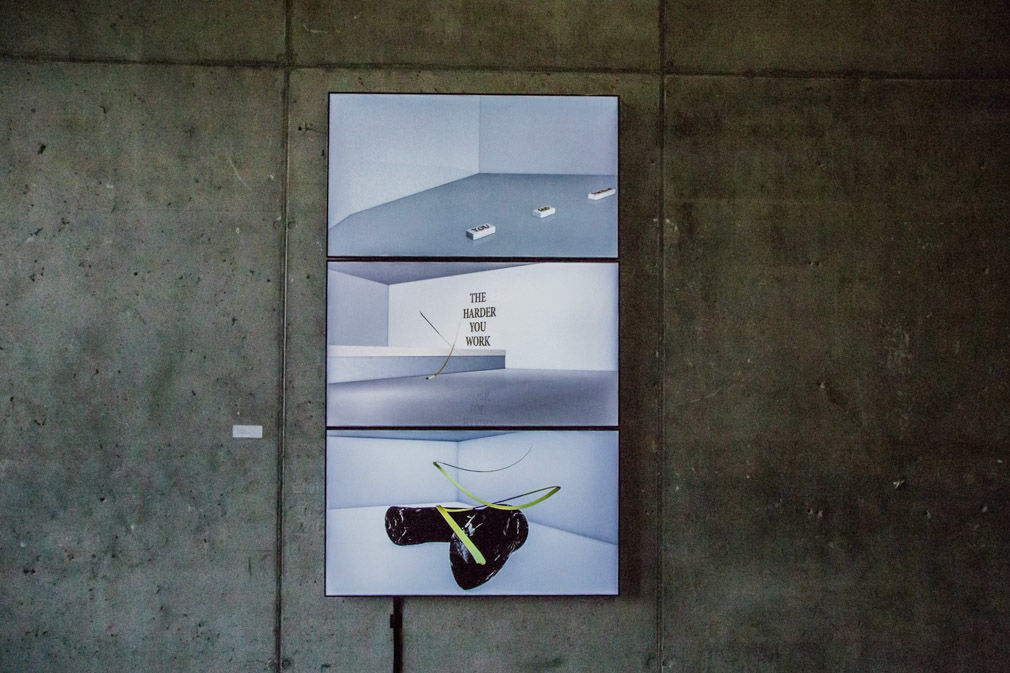 In this 3-channel video installation, adaptations of phrases from popular culture are presented that in contemporary visual and object aesthetics tend to be used excessively as (decorative) motifs on surfaces. Here, they are juxtaposed and take the form of recordings of monumental figures in the middle of a virtual setting. In different sequences substitution of actual action and the poles between banality and individual importance are juxtaposed and combined. 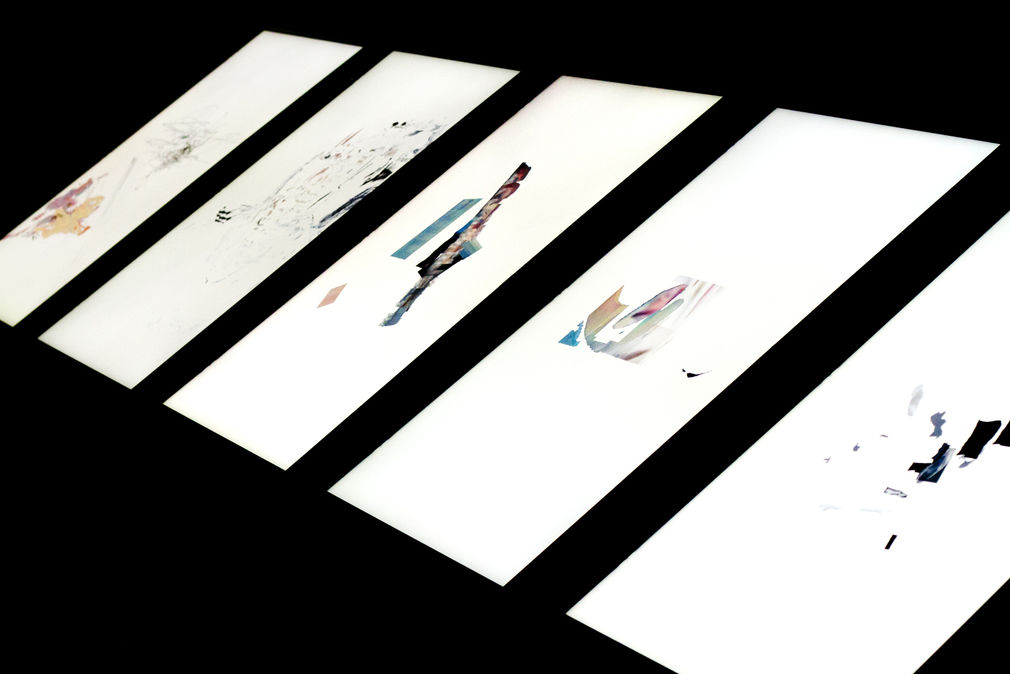 This work explores the human being and the various ways people are represented digitally in media. It involves having various programs analyze a webcam video and depict the information thus filtered along with specific aspects on several monitors simultaneously. Viewers see movements, positions, surfaces or colours.

The abstract images are juxtaposed with the original sound of the video, which is played simultaneously. Considered together the various channels hint indirectly at the person recorded in the original video without showing them directly.

The aim: using these images evaluated by the computer students should research to what extent the human aspect and immediacy are retained or lost in digital transformations and databases. 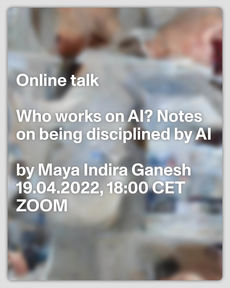 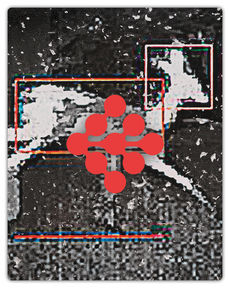 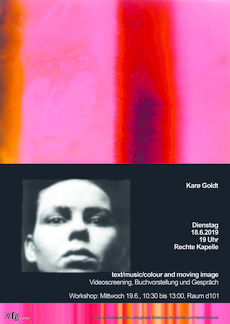 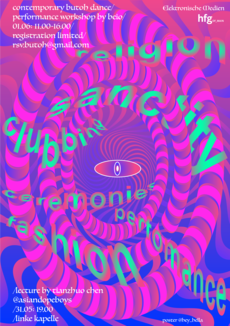 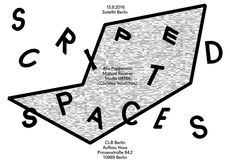 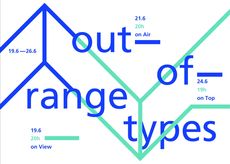 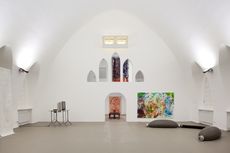 Once again HfG Offenbach will present at the 65th Berlin International Film Festival (February 5-15, 2015) with productions by and involving our students.